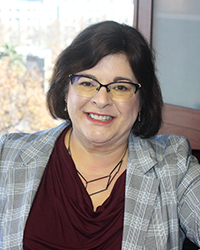 I’m the oldest of three and born in Arizona to two Italian parents. I’m a daughter, wife, mother of two and last but not least, an advocate. I value freedom. I’m often described as fearless. I’m good at maintaining friends because I care. I advocate for those who have no voice, which is why I’m an employment lawyer. I work to provide exemplary service in a truly sincere and authentic way.

Since 1989, Lori has been practicing civil litigation throughout Northern California. She is experienced in civil litigation, professional malpractice, employment discrimination, labor and employment, personal injury, wrongful termination, and general business and contract disputes. Lori is licensed to practice law in both state and federal courts in California.

With more than 25 years of experience, Lori Costanzo has engaged in a broad range of complex civil actions; she has handled jury and bench trials in both state and federal courts, and has served as a fierce advocate for her clients in mediation and arbitration. Her experience extends to the judicial level where she served as a Judge Pro Tem in Santa Clara County and is currently a Mediator & Early Neutral Evaluator on the Santa Clara County Superior Court Panel.  Lori also enjoys developing her private mediation practice.

In addition to running a thriving general civil litigation practice, Lori is involved with the local community. Lori currently sits on the Women Lawyer’s Executive Committee as well as the Labor and Employment Executive Committee for Santa Clara County Bar Association; she was recently appointed by  Supervisor Susan Ellenberg to sit on the County Equal Access to Employment Commission and  has served as an adjunct professor for Advanced Legal Writing courses at Santa Clara University, School of Law. She has also  volunteered at the Senior Adult Legal Assistance (SALA) and sits on the board of Latinas Contra Cancer (LCC) where she is involved in developing their patient advocacy program.

Prior to founding her own law firm, Lori was an associate attorney at various law firms in the Bay Area, including Morton, Bennett & Lacy in SF and Mitchell, Stock, & Burrow of San Jose. Lori earned her law degree from the University of Pacific, McGeorge School of Law and received a B.S. in Business Administration from the University of Arizona.