Vaccination Requirements And Your Religious Freedom 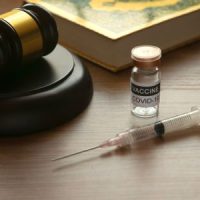 The requirement to be vaccinated–or the ability of an employer to require you to be vaccinated–certainly varies from state to state, but most states have vaccine exemptions for religious beliefs. This is to avoid conflict with the 1st amendment right to freedom of religion, as well as to avoid discrimination based on federal and state employment laws that forbid discrimination on the basis of religion.

Your Employer Wants You to be Vaccinated

As a general rule, both the federal government and the State of California say that most employers can require that employees be vaccinated. But if your employer wants you to get vaccinated, and you refuse on religious grounds, can you legally be terminated–and if you are, can you sue for religious discrimination?

As a general rule, to get freedom of religion, or to allege discrimination based on religion, you need to have what the law calls a sincerely held religious belief.

What is a Sincerely Held Belief?

This term has a lot of meanings, but in the context of vaccines (and religious exemptions to refuse to get them), your objection to getting the vaccines cannot be personal, or philosophical–it must be a bona fide tenet of your religion.

Courts will ask whether your religion is one that you believe in, or adopted, a long time ago, or whether it is one you just decided on recently because you didn’t want to get vaccinated.

Courts have said that a true, sincerely held religion has concepts and beliefs that relate to “life, purpose and death,” and some courts will allow your employer to look at your past behavior, to see if it is in line with your religious beliefs.

Generally, if it is a gray area, courts will side with the employees, as Courts don’t like to get into telling people what is and what is not a bona fide “real” religion.

Your employer can question you, within reason, about your religious beliefs, your religion, and why you feel your religion forbids vaccinations. However if the questioning becomes overly intrusive, or invasive, or if the employer seems to be judgmental or say anything insulting in conjunction with the questioning, that could indicate potential religious discrimination.

Accommodations Must be Given

Note that even if you do have a sincere religious objection to being vaccinated, there are some jobs where your employer can still require that you get vaccinated, if you work in professions where being vaccinated may be a bonafide requirement of the job.

Additionally, even if you meet the standard for a religious exemption, your employer can accommodate you in any reasonable way, such as allowing you to work from home. Your employer does not necessarily have to allow you to work on or at the work site, or to do the same kinds of things you were previously doing.

Contact the San Jose employment law lawyers at the Costanzo Law Firm today for help if you have been discriminated against at work based on your race, gender or religion.

By Costanzo Law Firm, APC | Posted on September 19, 2022
« Does Your Employer Have To Accommodate You If You Have Fibromyalgia?
California Expands Pay Transparency Requirements »
Free Intake Form
Evaluation