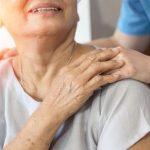 Asian Elder Abuse, Hate Crimes On The Rise In California

Recently two elderly Asian women, aged 63 and 84, were stabbed without warning while waiting for a bus in downtown San Francisco. Witnesses describe a man approaching the women with a large knife and attacking them suddenly from behind before walking away as though nothing had happened. The attacker was identified as 54-year-old San… Read More »