Yes, You Can Talk About Salaries At Work 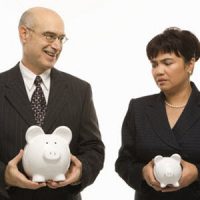 Although discussing finances, such as salaries, with co-workers may be uncomfortable or even taboo, it is one of the most powerful and effective ways to combat unequal pay in the workplace. Companies have long benefitted from policies that allowed them to prohibit talking about salaries at work. In fact, prior to 2015, it was even legal to fire employees for discussing their salary or benefits with other co-workers. This allowed businesses to pay unequal wages (primarily to women and minorities) with almost no oversight, and escape accountability for years. After all, it’s almost impossible to know whether you are being paid fairly when you are not allowed to discuss pay with your peers and co-workers. This weaponized lack of transparency kept pay inequality pervasive, particularly in the tech industry and silicon valley. However, California’s Equal Pay Act has aimed to increase transparency by making salary discussions among co-workers a protected activity. By ensuring that employees are legally protected in discussing their salaries, companies now have a strong incentive to make sure that they are paying employees fairly in the first place.

How Does Equal Pay Work?

Equal pay does not guarantee that you will be paid exactly the same amount as your peers. There are still certain differences that may be taken into account when establishing salary, such as relevant experience and job-based responsibilities and duties. However, it does ensure that employees who are providing substantially similar work receive equivalent pay. This is true regardless of job title. In the instance of a janitor and a housekeeper, they have different job titles but their job duties may be substantially similar. If this is the case, and the housekeeper is paid less than the janitor for substantially similar work, then the housekeeper would have an equal pay claim.

Prior to the passage of amendments to California’s Equal Pay Act, employees were not protected against retaliation for their efforts to ensure that they were being paid fairly. Employees could be fired for discussing salary at work or could face negative employment actions or workplace retaliation for attempts to ensure that they were paid equally to their peers performing substantially the same work. However, the amendments to the Unfair Pay Act have provided protection against such retaliation by making such conversations a protected activity. The Equal Pay Act creates an employee right to knowing how much an employee performing a substantially similar job role earns. Any attempts by human resources departments or company management to prohibit such conversations or inquiries are illegal under this law.

If you have received unequal pay or are facing illegal workplace retaliation or discrimination, the experienced San Jose employment lawyers at Costanzo Law Firm are ready to zealously advocate on your behalf and ensure that your rights are protected and that you get the compensation that you are entitled to. Contact us today to schedule a personalized consultation.

By Costanzo Law Firm, APC | Posted on August 23, 2021
« Is Workplace Bullying Illegal In California?
What Is An Interactive Reasonable Accommodations Process? »