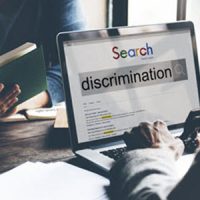 A slew of recent incidents has drawn attention to a host of issues within artificial intelligence video-interviewing software which points to algorithmic bias favoring white, male applicants. The MIT Technology Review recently published a study on the ways that many of the nation’s top job search engines have been working to try and eliminate algorithmic bias as a result of incidents which revealed that artificial intelligence video-interviewing software discriminates against individuals with disabilities that affect facial expressions and exhibits bias toward candidates that it identifies as female. Other forms of algorithmic bias can include image-cropping which automatically focuses on white faces, even when Black faces are also present. Silicon Valley has been quick to attempt to remedy these issues, and points to unconscious bias resulting in these “bugs,” however, they keep happening, leading some to question whether the discrimination of marginalized groups is actually a central tenant of such technology.

The Deep Problem of Racism and Technology

Experts in race and African American studies point out that Silicon Valley actually has a huge incentive to perpetuate such harmful technology, which appears to be more progressive while continuing to perpetuate existing inequities. Amazon, for instance, developed and sold millions of dollars in facial recognition technology to police, despite substantial evidence that it was resulting in a disproportionate amount of harm to Black people. Experts note that Amazon would not have profited from this had the existing justice system not disp[roprotionately targeted Black people for surveillance arrests. Amazon has only ceased the sale of this technology as a result of serious backlash it faced after the murder of George Floyd.

While Silicon Valley companies continue to write off these instances as individual glitches, bugs, or isolated errors, the pervasiveness of such barriers to entry for marginalized groups has significant spillover effects for the entire industry. Algorithmic bias favors white, male applicants. White males who design artificial intelligence based on their own experiences, and perpetuate the obstacles for all who do not share their characteristics and experience. Experts warn that such technology results in less diversity, and keeps racially diverse and female applicants from accessing influential positions in the company. Silicon Valley already perpetuates racial and gender inequality in leadership positions in so many ways, and this barrier to entry is yet another, streamlining the path for white male applicants and creating unnecessary obstacles for anyone capable of widening it. In this sense, the trajectory for such technology seems to become increasingly narrow, but it’s narrowing seems beneficial and self-serving for those already in power.

If you have experienced discrimination, harassment, or disparate treatment by your California employer as a result of your race, gender, or other protected status, you are not alone. The experienced San Jose employment lawyers at the Costanzo Law Firm are ready to zealously advocate on your behalf and get you the compensation and support that you are entitled to. Call today to schedule a personalized consultation.